If you are a parent, you might be familiar with your baby endlessly playing with their favorite doll. It might lead a lot of you to wonder why babies love dolls so much.

The answer is quite simple: they are amazing! From the texture of a doll’s hair, to the fashionable dresses it wears – dolls make sure they do a great job at keeping your baby entertained. They also act as loyal companions of your children.

However, in order to fully understand why babies like dolls so much, let’s dig a little into the psychology of playing with dolls.

Time after time, research has shown that dolls encourage feelings of empathy, love and care amongst children. Playing with dolls also helps children to emotionally grow, allowing them to connect with others on a deeper level as well.

When babies play with dolls – be it alone, or with someone else – special parts of their brains called the prefrontal and posterior superior temporal sulcus (pSTS) are activated. The (pSTS) are responsible for developing emotional skills that are useful in social interactions.

Lastly, it is no surprise that babies think of dolls as their friends. Research concludes that doll play is a vital form of pastime that all children must experience in their childhood. Picking on different roles through dolls also helps children to think through others’ perspectives.

This information might be enough to satisfy your need to figure out what goes on in your little one’s mind when they are playing with their favorite dolls!

Why do toddlers love babies?

We are aware of the psychology behind playing with dolls now; however, are we aware why toddlers love babies so much?

When a child is playing with a doll, you might notice them acting with it in the same manner as their mothers do around them. Children hug, feed, play, and take care of their dolls.

It is what they might think they are supposed to do, as it is the strongest form of affection they witness since they open their eyes. For this reason, playing with dolls is an act for them which is as natural as it possibly can be.

There is another reason why toddlers love babies so much. When they have slightly grown a few months, kids’ can easily distinguish the facial features of the people around them. This phenomenon explains why they might get cranky around strangers.

But if a baby is near a baby, through an unspoken bond perhaps, a connection immediately forms. Babies love spending time with other babies as if they can understand each other’s language as well.

Why do toddlers love babies? Well, the earlier discussion sheds light on why babies adore dolls: they cannot help but nurture and play with dolls just as they are taken care of by their parents in the real life.

When children are playing with dolls, they take care of them as if dolls are their own children as well. Through pretending to feed, changing the diapers, hugging, and rocking a baby doll children fully learn the importance of empathy.

Taking care of a baby doll makes them realize the importance of empathy. It exposes them to the role of a parent and instills in them a need to be protective of the people you like.

It also helps develop essential skills and improves a child’s cognitive abilities as well. Maneuvering a doll carefully with the fingers allows children to use their hands with dexterity. The movement of fingers also helps to strengthen important muscles useful for daily activities.

When babies help a doll shower, change its clothes, and ensure it is free from dirt, they also reinforce how important saying clean is.

Yes – besides all other skills that kids learn when they play with dolls, it is proven that their cognitive skills appear to be better as well. When kids play with dolls, they imitate their parents.

Allowing children to use language that is often used by their parents gives a chance to children to learn the same words and effectively utilize them in conversations as well.

If a child says, “Oh, my dear baby! I hope you are not hungry,” when they refer to their doll, it definitely implies they are picking on sentences used in their surroundings. This improves their memory and allows them to construct sentences of their own as well.

Gone are the days when you could only find blond, blue-eyed dolls at different shops to purchase for your children. In the twenty-first century, dolls have diversity too. With increasing diversity, various new skin tones have been introduced to make sure each child gets the kind of dolls they desire.

The best baby dolls for toddlers also represent cultural backgrounds. These nuances make sure a child feels included in society. For example, if a black child wants to get a black doll; it must be available for them.

The same applies for dolls with disabilities. To make sure children with disabilities do not feel excluded from society, the best baby dolls for toddlers come in various forms as well for equal representation of every child.

It is how children make perceptions of the world: if they are represented in dolls, they might not feel excluded from society from such a young age.

It should not come as a surprise that realistic baby dolls are the best. Fashion dolls nowadays particularly lack the element which might make it easier for young kids to relate to them. In all their glitz and glamour, dolls’ manufacturers often forget that dolls are used by young kids.

Dolls might lead to promoting harmful stereotypes that should be eliminated from society. Realistic baby dolls tend to steer clear from engaging in advancing such ideologies.

The best baby dolls for toddlers are the ones that can get as realistic as possible. They might not be repeating the same phrase over and over again, and are not necessarily symbolizing a particular character from a film or movie.

Dolls that do not speak are the best because they allow babies to play with them in whichever way they desire. Constantly listening to the same phrase repeatedly also hinders mental growth, so realistic baby dolls tend to promote healthy ways of play as well.

Why do babies like baby dolls? Well, a lot of things are taken into account to give a reasonable answer to this question. The psychology behind playing with baby dolls; how it helps children grow; the type of dolls one should get – all these aspects help one realize why dolls play such an important role in a child’s development and early life. 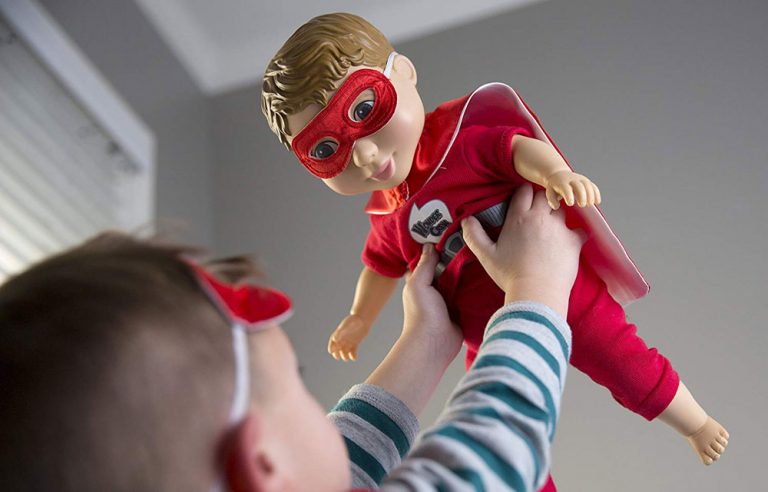